Once upon a time in a town oft referred to as “The Whale’s Vagina”, a little sandal company named Reef was formed by two brothers from Argentina with a dream.  That dream (or shall we say “wet dream”) exposed to the world a top selling sandal brand and more importantly for us surfers, a marketing campaign of bootylicious proportions.  What the two brothers already knew and surfers would soon find out is that nothing sells sandals better (or rules more!) than full page ads of scantily clad, thong embracing bikini models from South America flaunting some seriously jaw dropping “ass”ets.  Strategically placed on page # 3 of every major U.S. surf magazine, the “Reef Girls”, as they came to be known, quickly became the iconic ambassadors of the burgeoning “bubble-butt” movement.  Never exposing the facial features or identity of the models, each ad focused solely on the perfectly tanned, bulbous behinds of a different exotic beauty each month, leaving the rest to the reader’s imagination.  Now that is something we as surfers can get “behind”!! 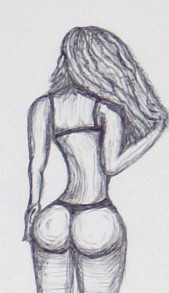 Back in the bitchin’ 80’s and ragin’ 90’s, every red blooded surfer with a pair of eyes and a set of Y chromosomes came to know the now infamous Reef Girls.  Unlike most short lived fads, the Reef Girl’s bubble butt brand equity had some serious staying power! Word spread of these bum blessed beauties like a black market coconut express on steroids.  Surfers could not help but stare in unabashed wonderment at the glossy, full page images of thong clad vivaciousness unveiling before their eyes.  Images of sexy long legs meeting oblique, curvy backsides infused themselves in surfers’ memory banks like the Everlasting Gobstopper of eye candy.  So prolific did the popularity of the ads become, that nary could you enter a prepubescent young surfers’ bedroom without seeing the tell-tale signs of these booty backed babes plastered all over their walls.  Intermixed with posters of their favorite surfers and wanderlust wavescapes, the Reef Girls were a constant source of daydreaming fodder, prompting many a grom to hypothesize that if only they learned to rip hard enough, that one day, they too could win over one of these bikini clad babes.  The bar was indeed set high!

Like most things of a controversial nature, it’s amazing that the Reef Ads ever made it into print.  After all, in the beginning, many of the mainstay surfing publications didn’t want any part of something so risqué.  Luckily for us surfers, the ads eventually got the green light and ran unobscured in all their bootyful glory. That is not to say that a little dust didn’t get stirred up in the process.  Every month like clockwork, a new batch of irate letters would pour into the mags from surfer moms afar threatening cancellations of their child’s subscription should they decide to run another ad.  It was as if overnight, the Moms of America had conspired to become the Prohibition Era Czars of the Anti-Booty Campaign. In response to these “ass”aults, the editors would typically fire back with some witty banter such as the following; “Dear Angry Mom- we’re sorry you feel the need to keep your son/daughter holed up in the basement with Sloth from the Goonies.  In the meantime, we’ll be at the beach hanging out with half naked people in swimsuits if you feel like joining us, thanks. P.S. – Don’t hate, appreciate!”  Score: Surfers- 1; Overbearing Moms- Nil.

In celebration of Reef’s 25th “Ass”iversary, they are holding a contest where you can win a spot as a guest Miss Reef Judge at their next bikini contest being held in Panama.  Sounds bootyrific!!  Click here to sign up for the contest and to vote on your “all-time” favorite Reef Girl.  In the off chance that you don’t win the contest (i.e. – don’t hold your breath) you will at least be granted that warm, fuzzy feeling (okkk, that’s creepy!) that comes from some much needed visual stimulation.  As they say at Reef- “Bottoms Up!”
To claim your own little piece of the bubble butt pie, check out the just released 2010 Miss Reef Calendar.  If your walls could talk, they’d thank you!

Posted by StuffSurfersLike.Com at 4:17 PM