#33 The End of Tourist Season 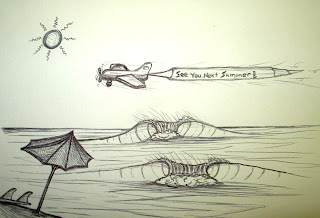 Every year the ebb and flow of seasons come and go like the sequential tick tock of the grandfather’s clock.  To the surfer, seasons are everything!  They dictate when and where they need to be to score the best surf.  Take for example the annual pilgrimage to the North Shore of Oahu like Rick Kane did to meet the North Pacific’s Winter swells or the annual trip down south of the border come summertime to get barreled at the “Mexican Pipeline” – Puerto Escondido. Timing is everything and the surfer is there to score!  But just as certain as there are ironclad seasons to mark a surfers’ calendar by, there are other more obscure but equally joyous seasons that surfers can count on to enliven their surfing year.  Better known as “The End of Tourist Season”, this period marks a special time of year where overrun, overly touristified surf towns can finally breathe a sigh of relief as their favorite beaches and surf breaks are once again their own!  Perhaps most noticeable and indicative of the season is the marked drop in head count at local surf breaks as uncrowded surf becomes the norm rather than the exception. Gone are the stifling masses of inland invaders (a.k.a. – “tourists”) clogging up the roadways and bobbing like buoys throughout the local surf lineups like “deer in headlights” conspiring to ruin your wave! (note - this makes surfing more akin to a game of whack-a-mole or slalom skiing than actual surfing!).  No longer are the silly partitioned sections of beaches donning blackball flags and restrictive “No Surfing Allowed” sections enforced. As an added bonus, like a flick of the light switch, the rabid armies of Wilbur Kookmeyer BZ board toting surf camp enlistees seemingly disappear overnight.  It’s a grand time of the year indeed! Just when one might think things couldn’t possibly get any better, they do!  “The End of Tourist Season” also happens to coincide with the annual “back to school” routine which means all the kiddos, surf groms, and soccer mom tourists are back in their respective towns or school and therefore not at your beach!  While this might be a major buzz kill for Alice Cooper and his epic “Schools Out For Summer” montage, rest assured there will be a surfer (many surfers in fact!) that will be grinning from ear to ear at the thought of this special occurrence.  Just check out how happy this particular surfer seems to be!

SSL Disclosure: Here at SSL, we love summer. Don’t get us wrong - summertime is great! With all the beach blanket bingo going on, scantily clad bodies (see Reef Brazil Ads), extended late night surf sessions (thank you daylight savings time!), and warmer temps both in and out of the water what’s not to like? But sometimes like a guest that overstays his welcome, the party is over, the circus leaves town, enough is enough!  And for that we as surfers are grateful for the time when “The End of Tourist Season” finally rolls around.  Read on below for more reasons why “The End of Tourist Season” rocks and you’ll see what we mean…..
We’re sure you have more! Feel free to comment…….
Posted by StuffSurfersLike.Com at 9:20 PM