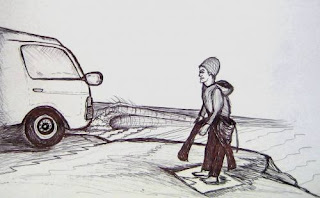 Surfers up and down the coastline do it nearly everyday. Whether parked alongside the road, in a parking lot, or in the warm confines of their surf roving mobiles; surfers are notorious for dropping trow in public to partake in their daily surf routine.  Armed with only an extra large towel and a wetsuit, surfers can find themselves in some pretty precarious situations from time to time.  The slightest slip of hand or stiff offshore breeze can quickly cross the line between semi public nudity and an outright eyeful of places where the sun don’t shine for the unsuspecting passerby.  While these minor inconveniences of man vs. the elements might discourage some, surfers barely bat an eye (…or “cheek” as it is). Besides, when the waves are firing, incidental casualties to the public eye are the least of their worries. Surfers are out of their clothes and into their wetsuits faster than old man Clark Kent can find a phone booth.
Over the years, surfers have developed a variety of ways to make changing in public a more comfortable experience.  Much to the chagrin of ogling Cougars and Creepers everywhere, surfers now have the option of wearing all encompassing terry cloth changing robes complete with hoodies to mask the nether regions on those cold winter mornings.  When public showers are not in the cards, surfers bring their own.  Surfers sport gigantic water jugs and even portable camping showers to wash away the salty remains of a solid surf sesh.  Changing mats ease the pain of asphalt for those with haole feet while Tupperware surf bins separate the organized thinkers from the mildew perpetrating stinkers.
As surely as waves will continue to peel along our shorelines, surfers will be there to greet them, boards in tow, changing towels in hand.  The act of changing in public will remain a social phenomenon unique to the sport of surfing and the overall surfing experience as a whole.  While surfers from coast to coast line up at the crack of dawn to score the epic dawn patrol, let us all hope the only “crack” we see is the cracking of the lip on that next set wave, and not the other way around!

Posted by StuffSurfersLike.Com at 2:24 PM