Surfers spend endless hours immersed in the hypnotic ocean; waiting, paddling, and riding waves for personal gain and satisfaction.  To outsiders this may seem enough, but surfers need more, and continue this voyeuristic journey at home by watching kick ass surf videos.

Surf videos are viewed for many reasons.  Whether a remedy for boredom or party entertainment, surfers like to learn new tricks and emulate style.  Like illusive set waves looming on the horizon, these ‘video lessons’ can be quite the deceptive medium where art does NOT imitate life.  They’re highly motivational, and have a way of making surfers feel they can surf better than they do.  Regardless, like a good song that gets stuck in your head, ‘surf vids’ continue to invigorate the soul and create the requisite stoke surfers need to get back in the water to try, try again.
Surfer idols date way back, but became popularized around the ‘80’s when Tom Curren displayed his quintessential mastery of style and flow.  Unfortunately, this footage led some surfers to become so overconfident and delusional, they’d make outlandish claims such as “I surf like Curren”, typically found printed on bumper stickers or short sleeve t-shirts.
Surf videos have come a long way since the classic Bruce Brown films. Though over the years, the common denominator of capturing exotic locales and a host of talent in amazing waves has remained the same. Today’s more progressive videos reveal groms jumping off yachts equipped with helicopter landing pads, hucking gorkin flips and superman airs in their sleep. In contrast, you’ll find the more laid-back and worldly productions like ‘Sipping Jet Streams’ aimed at putting your travel experiences to shame in one hour or less.  Adding a more earthy perspective to the video collection, titles such as, “Singlefin-Yellow” or “Glass Love” help some surfers rationalize that they can cruise on trendy retro boards for the art of surfing, and not because they can’t shred anymore (…if they ever could). 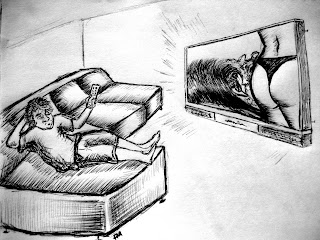 Despite advances in filmmaking and surf progression, surf videos like most things of substance had to get their roots somewhere.  All-time classics such as, “The Endless Summer’ and ‘Occumentary’, have paved the way for what we see today.  Videos from past and present are notorious for adding a little something extra for their surfing audience. Understanding their market all too well, some productions come pre-packaged with bubble-butt babes parading around in skimpy thongs, something equally important as
perfect waves.
The more ambitious, albeit misguided surf films flex their b-grade acting skills by introducing ridiculous plots and cheesy lines delivered by our very own surf stars (i.e. “Loose Change”).  While these films opted to hire within, others cut budgets by recruiting local bum talent. This was successful for carrying out the more demanding roles as that guy who partied too much and had his hair set on fire for added comedic relief. 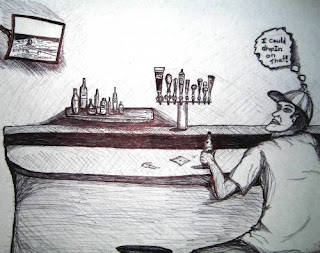 Surfers party, and whether throwing a rager at home or hanging with bros at the bar, a surf video is certain to be playing nearby.  This sets the stage for a slew of alcohol induced lies and exaggerated theatrics to follow.  It’s only a matter of time before somebody has enough liquid courage to claim they can handle Mavericks or Teaphupoo (“on a smaller day” of course).  Similarly, others will feel the need to test their buddies manliness by intermittently asking, ‘would you drop in on that one?” as beastly waves roll by on the TV screen. The answer, not surprisingly, will always be a resounding “YES!”
Surfers love their surf videos and collect them proudly.  Similar to a trophy case or a shrine, their coveted collections can be seen prominently displayed for all to see. Much like watching a perfect wave go by un-ridden, it’s hard for surfers to walk past an unfamiliar flick and not want to “borrow” it.  Lending any surf video can be serious business, when you’ll see it in your possession again is anyone’s guess.  No matter how bad the video, months, even years might pass by under this open ended return policy.  Inevitably, when called into question, some will deny recognition of ever borrowing the video in the first place.
Surf Videos are a proven platform for showcasing the world’s best talent in the most idealistic of settings. But sometimes being reminded of perfect waves that look nothing like what everyday surfers ride can become about as stale as a lingering fart. And what about the corpo brand awareness strategies aimed at lil’ Jimmy and his mom’s purse?  The integrity of the sport should not be lost.  For surfers, a surf video is just that – ‘surfing’.  Stay core, and try to surf like Curren…if you can!

Posted by StuffSurfersLike.Com at 12:08 PM