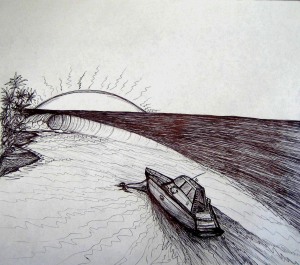 Like pioneering protégées of Jacques Cousteau, surfers like to travel far and wide canvassing the world’s oceans and coastlines in search of perfect waves.  The urge to travel reaches the tipping point when a surfer’s home break brings nothing more than a full parking lot, mediocre waves, and a packed house in the line-up.  To surfers, at some time or another, this becomes wearisome and monotonous. The solution is the commonly shared epiphany in the form of a much needed surf trip.

These days surf trips range anywhere from the low budget, “free-to-be-me” excursions living off rice patties, coconuts, and a mosquito’s bite away from malaria to the uber expensive boat trips where five star cooks serve up sashimi in between surf sessions, while captains cruise from break to break on palatial yachts.  Regardless of the path taken, at the heart of any good surf trip is the desire to score great waves with a few buddies and enough harebrained antics to keep things interesting along the way.
As some surfer once said, “One man’s sausage fest is another surfer’s nirvana.” This is generally the perception when a surfer tells a non-surfer that he’s forking over $5k to travel halfway around the world only to spend 2 weeks with 8 dudes floating around in a boat.  Surfers know better, recognizing that good surf trips consist of 8 hour marathon sessions even if it means swapping pungent B.O. with your buddies in tight quarters.  Surfers know all too well that the waves back home will undoubtedly be a real Debbie-Downer upon their return and that it’s best to seize the moment at hand.
Whether a surfer decides to go at it alone or sequester the services of an all-inclusive surf package, surf trips require considerable advanced planning and research.  Surfers like to spend countless hours on the internet or reading books made from earthy recycled materials like “The Surfers Guide to [insert epic locale]”  in order to quote unquote “get dialed in” and “score”.  As part of their preparation regiment, surfers like perusing their local surf shops for a new board or in some cases a new quiver to shred on their upcoming surf trip.  During this exchange, an entire kaleidoscope of surf banter will typically ensue between surfer and surf shop employees ranging from templates to rocker and usually ending with the surf shop employee saying something along the lines of “ya know, Kelly won the Chopes contest on this board”.   A trip to the surf shop also vindicates the surfer’s self righteousness by allowing the surfer to nonchalantly, yet purposefully announce to all the $9 per hour earning surf shop employees and customers within earshot; “Ummm… yea, I’m headed to Indo next week, the waves should be okay over there this time of year I guess”… 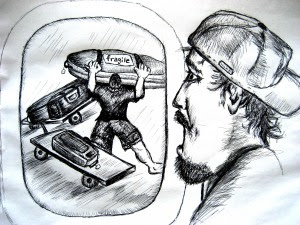 These days’ surfers take to the sky to reach the majority of their far flung surf Mecca’s. While checking in at the airport, surfers like Jedi mind-tricking the airline baggage personnel into believing the monster coffin surfboard bag that barely weighs south of 80lbs contains only 1 surfboard, not 4.  The more creative and flamboyant surfer will exhibit any number of shameless techniques such as flirting with the baggage lady with a hairy mole and suspect crustache on her face to get out of paying exorbitant fees.  To make matters worse, surfers often overpack their board bags full of old t-shirts, stickers, and dirty magazines to use as additional currency and bribe worthy collateral in their 3rd world destinations.  Once on the plane, it’s hard for the surfer not to peer out the window and stare in horror as the ogre sized baggage handlers haphazardly toss their precious board bags onto the plane’s conveyor belt. The damage done is only yet to be discovered after the plane touches down.
Upon arrival at the surf destination of choice, it is not uncommon to see surfers displaying erratic behavior as they scramble over one another like a colony of army ants looking to get the first surf of the trip under their belts.  In true rookie form, and in sheer haste to nab waves, some surfers will brainfart on the sunscreen application altogether, resulting in the undesirable Charles Bronzin' look. You may find the same surfers spending the rest of the trip sporting rash guards, zinka, and straw hats out in the lineup.
After several days of 8 hour surf sessions in surfer heaven, surfers might feel the need to unwind a bit by taking in some of the local nightlife, ranging from a spiritual kava ceremony to an outright all night rager. If by chance visiting their amigos in Mexico, Central America, or South America, surfers cannot help but hit up the local discothèques in search of the indigenous hotties that love surfers.  Under these circumstances coupled with copious amounts of tequila, surfers tend to imagine they are fluent in Spanish and will confidently spout off the same 5 to 6 phrases retained from high school Spanish class when they weren’t too busy doodling waves on their Trapper Keeper.  Some surfers will even go the extra mile and create their own new phrases like “solo tengo un nickelette” (See Jeff Spicoli) when it’s their turn to buy a round for the crew.  Inevitably, after partying all night like this, surfers end up missing out on the epic dawn patrol session.
All good things must come to an end and surf trips are no different.  But like most trips, surfers who travel are awarded the unique pleasure of returning home to share (ok, brag about) their new experiences with practically anyone who will listen. This includes the exotic foods, cultural differences, and most importantly the amazing waves they scored, that at its core conveys to the listener in no uncertain terms; “You missed out!!!” The painful reminder doesn’t stop there. Surfers cannot help but upload a barrage of photos and video footage of themselves to their favorite self promoting web 2.0 sites such as Flickr or Facebook in a shameless attempt to garner more attention.
Years will pass, and surfers will continue to plan more trips.  Unless of course life gets in the way and the surfer is married with overbearing spouses, has kids, a mortgage, or just too many trips lined up to Bed, Bath & Beyond and Home Depot.  Whether they don’t know if they’ll have enough time or not, let’s hope they won’t continue to recount the same old tiresome stories from the surf trip they did 10 years ago, and will find new ones to replace them with.

Posted by StuffSurfersLike.Com at 11:32 PM