Surfers like scoring good waves as often as possible so it should come as no surprise that they periodically wake at the ass crack of dawn to get their fix.  Arguably one of the best times of the day to surf, the Dawn Patrol more often than not greets surfers with a picture perfect canvas to shred, a surefire way to start any surfer’s day if you can overcome the Zzzz’s.  So addicting is the Dawn Patrol that those surfers in the know or maybe just those with normal day jobs find it in themselves to wake in the wee hours of the morning to snag a few waves, while the rest of the world hits the snooze button and the early birds sit in gridlock traffic.  Surfers who frequent the Dawn Patrol take great pride in the fact that they have conceivably already done more with their day between the hours of 6-8 a.m. than some people do all day.  Along these same lines, most dawn patrol surfers cannot help but rub salt in the wound by bragging to all their surfer buddies and that one guy who sits on the couch all day about how much they scored and they didn’t.  It is not uncommon to overhear such surfers making overzealous statements like “You missed out!”, “I must have caught at least 50 waves” or the title clenching “It was all-time!” Getting up for the Dawn Patrol for some surfers is a tricky endeavor in and of itself. Luckily for surfers, age old stimulants like “coffee”, “yerba mate”, and a host of other caffeinated beverages with quasi Italian names (think Sbuck’s) turn the tide on an otherwise daybreak doozy.  Some dawn patrol surfers take caffeinating to a whole other level thus attaining the illusive “Coffee High Guy” status.  Coffee High Guy can be seen jabber jawing the ears off his buddy’s in the lineup or frenetically chugging an oversized java in the parking lot.  Not to be confused with his distant cousin- the crackhead, Coffee High Guy is generally harmless except during the pre dawn hours where he may be prone to call your cell phone and leave disturbing messages like “wakey wake, hands off snake!” in the likeness of the late Steve Irwin. 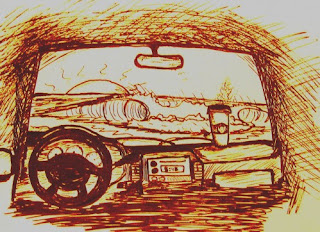 Surfers must overcome many obstacles along the road to morning surfing bliss, some more dubious than others.  Besides the obvious factors like sleep deprivation and warm bed withdrawal syndrome, surfers must combat a slew of insidious Dawn Patrol deal breakers.  For one, surfers like to party, (see Jeff Spicoli), occasionally falling victim to the overindulgent poisons of Grandpa’s cough medicine after an all night rager.  The typical party to hangover time continuum leaves very little chance of actually making it out for the next day’s Dawn Patrol and as luck would have it, the waves are usually firing to smite the surfer for his infidel ways.  Surfers also like empty lineups and often seek the perceived solitude of the Dawn Patrol to hit their inner Qi quota for the day ahead.  Nothing chafes a surfer more than rolling up to a favorite surf break at half past the ass crack of dawn and seeing 50 heads already suiting up.   Under these dire circumstances, don’t be surprised to see an influx of beanie wearing, goatee growing, coffee sipping surfers blanketing the scene and it goes without saying that somebody will ask to borrow some wax.  Images of overcrowding and just plain getting skunked can inflict potentially damaging scars on the surfers’ dawn patrol psyche, quickly turning the prospect of putting on a stinky wet wetsuit in the cold, dark twilight hours of dawn into a game of alarm clock roulette.  Despite these minor setbacks, surfers are a resilient, wave hungry bunch and manage to wipe the sleep out of their eyes and into the surf before most have managed little more than another drooling episode on their pillow.
So....see ya out there tomorrow morning round’ 5:30? Don’t forget the coffee!
Posted by StuffSurfersLike.Com at 11:15 PM